Puddingstone is nothing culinary. It’s geological, mythological, historical, and extremely intriguing. As stone goes it is awkward. It looks like a wonderful fruit pudding, or cake, just before it goes in the oven. There is a rich brown colour to it, but not too dark. There are various sized pebbles, some whole, some broken or chipped. We refer to that pre-cooked state of a cake as a mix, and the Puddingstone is just that, a mix. In scientific terms, it is a conglomerate, which means it is made up from a whole variety of small and large pebbles randomly cemented together in a matrix. The opposite to Puddingstone would be Portland Limestone, which is made up of microscopic uniform particles that have fused with each other. Limestone has been used as a building stone throughout history.

Geologically, the stone is relatively recent, in that it is only 50 million years old. The flint pebbles that you see were deposited in river beds and covered by London Clay, which 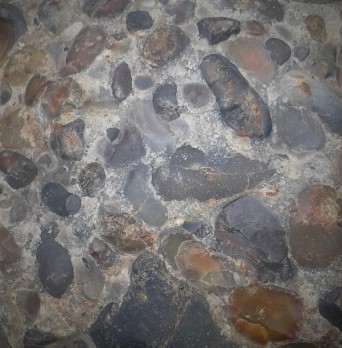 became the “cement”. During an ice age the mixture was compressed and solidified by the huge pressure pushing down from the massive ice sheets above. Similar to cookery, you can use heat or pressure to cook a pudding. As the ice began to recede at the end of the ice age, large pieces of the rock were broken up, transported by the flood water and finally deposited across the landscape that is now Hertfordshire. It is quite unique and suffice to say it was formed by very precise conditions and materials. Almost all of the puddingstone is found in Hertfordshire. Apparently, there is less puddingstone in the world than there are diamonds.

Small seams of puddingstone appear down river gullies, where it is eroded and exposed. It often lays undisturbed just under the surface of fields and pieces suddenly appear after ploughing or after a heavy storm. Sometimes people pick small pieces up to use as ornaments, doorstops, or even for wanting to possess such a crazy stone. It has been used in the foundations of buildings as it is tough stuff, but it cannot be shaped or controlled as limestone can be. In some locations large boulders have been moved and situated in certain places to encourage reverence.

In Standon, Hertfordshire, there is a large boulder of it at one end of the village, by a fork in the road. It fascinates me. It was put there in the early 20th century by the Rev. W. d’A. Crofton, then curate-in-charge of the parish. I gleaned this from a local history book, I always find myself frustrated with such texts, as they stop at the basic facts and skip over history. Why was it put there and what is the story behind it?

I also find it frustrating when talking to locals when trying find out a bit more. They can have an air of dis-interest. I was hoping to quickly complete my research by simply speaking to the people who lived there. Most comments have been along the lines of, “it was there when I was a boy.” I had the feeling there is a bit of reticent towards the stone, which may indicate some attitudes or events from the past. We inherit and hand down our beliefs and values through the generations. More positively I was told, “it was originally in the church [just opposite], used in the wall.” “In the actual building?” I ask, “No, the wall around the churchyard.” Well, there is something, a boundary marker perhaps.

My interviewing also discovered that “the Morris Dancers start there on the May Day parade.” “So, the stone marks the start of the May Day celebrations?”, says I optimistically. “No, the parade starts at that end of the village. The stone just happens to be there.” Perhaps I was speaking to the wrong people. I found out that the Standon Morris Dancers dance around the stone and place a garland around it on the first of May at sunrise. My plan was to see the dance this year and interrogate the dancers, but I didn’t make it. It started at 4.30am and I was afraid of getting caught up in rush hour traffic.

It has attracted interest on-line, from people, presumably, outside the area like myself. There are suggestions that it “resembles a Palaeolithic female figure”. It does, but I think

that is just the shape of it and how it has been worn by natural processes, rather than intentionally shaped by people. There is evidence of puddingstone being used in prehistory, such as for quern stones and building materials. Links have been made to the purposeful continuity of pagan rituals by the Christian Church into its own buildings and sites. Perhaps that is a connection to the Standon Puddingstone being use in the church wall. There are many other instances of puddingstone used in churches, such as in Chesham, where it appears to be part of the church’s very foundations. It is also said this puddingston was part of a Bronze Age stone circle, although the claim appears to have sparked some debate.

The mythology of it in folklore is alluring. The stone has fertile properties and I’ve come across it being referred to as the “Mother Stone” or “Breeding Stone”, in that they multiply underground. If you take one out of a field, another will grow back. The “Mother Stone” gives birth to pebbles. Superstition amongst farmers derives from the stone suddenly appearing in fields. They believed the stones could destroy crops, or equipment. This makes perfect sense. Puddingstone does suddenly appear in all shapes and sizes, and is so hard that they could break precious farming equipment.

The sudden appearance also gave rise to the idea of the stone moving by itself and so having conscious feelings and emotions. One online report tells of “a block of puddingstone between Thorley and Bishops Stortford that turned around when it heard the town clock in Stortford strike midnight.” I haven’t found that story, just the report, and am quite intrigued by the story’s origins. Was the stone travelling to Stortford, was there a reason why, why did it stop and turn back when it heard the bells, what significance did the bells or midnight have, where did it go back to, did it go elsewhere instead?

It was believed that puddingstone could ward off evil, sometimes being called hagstones. Small pieces were carried in pockets. Larger blocks were placed on doorsteps, gate posts, on village greens and in churchyards. A parish record of 1662 records how a suspected witch was to be prevented from escaping from her grave, “A hagstone be placed on the coffin for her bodie within be bewitched.” I’ve seen this three times on the internet, but never a reference to which parish record, or even which parish. Other websites talk about putting puddingstones on top of coffins to protect the deceased, again to ward off evil spirits and bring good luck. They have been used as grave markers and coffin stones. Some large puddingstones still mark graves.

This may explain to some extent why the Standon Puddingstone was in the church wall. Perhaps it was protecting the church and grave yard, keeping evil outside the boundary. This makes me think, why? Was Standon, or the surrounding area particularly evil, or were the residents particularly superstitious? Does it date to the pre-Christian period or early medieval when mythology, Christianity and everyday life interacted with one another?

Suffice to say, I am unsatisfied and know there is much more I have to do to. Reading the books and online reports, there is a contradiction and confusion. I think this is more due to our naivety of folklore and mythology. There are gaps in our knowledge that we try to fill or “skip” over. Folklore is a deeply rooted subject and often we hear stories out of context with other narratives, people or figures. As a culture, we don’t engage with folklore at a deep level. We don’t need to on a practical level. In the oral tradition, stories, songs and even dances were used for morality or practical reasons, such as how to survive when a season goes slightly awry. Many connections between the things we see in a landscape, stories and people have been lost.

For me, I need to visit more local history rooms, second hand bookshops, jumble sales, keep talking to local people and visit the pubs in Standon. If anyone reading has anything to add, let me know. And I’ve got a date to keep on 1 May, at 4.30am.

Writing odd stuff about history, archaeology and archives. View all posts by The Historier