Thinking of my previous article on dirty books and manuscripts, I once worked on a book that was covered in very different kind of grime, and a very different context. This could be some archaeology I discovered in the archives?

One area of history I have become quite familiar with the past 8 years or so, is around sewers. Whilst in the London Metropolitan Archives (which I will now call the LMA) one day, I decided to look at sewer material, as in documents, books and plans about sewers. Not the actual sewer material, or so I planned. The LMA has the archive for the Metropolitan Commission of Sewers, which was active around the 1840s to 1860s. It went on to become the Metropolitan Board of Works, which was absorbed by the London Country Council, and in turn became the Greater London Council.

I saw on the catalogue surveyors reports dating from around 1855. These are the actual notebooks that sewer surveyors were filling out in the “field”, that being the streets in Westminster. There were plenty notebooks in the box and I couldn’t resist looking for one I thought could be pertinent to the story of public health in London and the UK. I was after surveyors’ books for Soho, hoping there would be one from 1854. This time and location was of one of the famous events in the history of public health.

In September 1854 cholera was at an epidemic level, spreading around London and Britain. This was to be the most devastating outbreak of cholera in the UK. Dr. John Snow was a GP in Soho and wore out a lot of shoe leather making his way around his parish identifying deaths from cholera and plotting them onto a map. From this map, he found there was a concentration around the Broad Street Pump. This discovery, although not taken much notice of at the time, led to the understanding of cholera and how it spread. Snow is known as the “Father” of epidemiology, and this story is celebrated in tours, anniversaries and even the John Snow Society. In Broad Street now there is the John Snow pub, a whole series of tours about the event, and a reconstruction of the water pump, which has a presence on Trip Advisor.

I was desperate to find a link to that event and believed that there must be a survey of that road, showing the, pump and the house that had the first case of chlorea. I searched and to be honest, couldn’t find the match I was after. That doesn’t mean it’s not there and I intend to look further.

What I did find though, was great. These note books have sketches of sewers in plan, going down the streets of Westminster, with inlets from other drains and sewers, along with the new “must-have” of the day, water closets leading in from houses. These plans of the drains form a skeletal representation of the streets. In reality they are more the veins, taking away the toxic material from the living.

As I mentioned they were recorded in the field, and completed in pencil. Some have been over drawn and written with a pen, but you can still see the pencil underneath.

The sewers an inlets are drawn with the measurements of dimensions and diameter­­­s. There are also notes about the condition of the sewers, eg “in state of dilapidation”, and the how much they were clogged up by sediment. It was this raw data that led to an assessment of London’s sewers and the capacity of them versus the contemporary needs of the city. The outcome was that the discovery that the system in the 1850s was outdated and not fit for purpose. It was not up to coping with the great demands of the Metropolis. The Metropolitan Board of Sewers, Joseph Bazalgette and many other engineers used this assessment to lobby and convince the government to undertake a complete overhaul of London’s sewers. Of course, the government did not take heed. It was seen as a self-interested party of engineers, presenting a piece of work that would only serve that self-interested party. The sewers of London were rebuilt due to the Great Stink of 1858, which had a direct impact on the decision makers. The MPs and government were personally exposed to the unpleasantness and dangers of the existing system of sewage.

Going through a surveyors book from March 1855, Book 1225, I found Broad Street mentioned at the bottom of one of the pages: “Broad Street, Book 1215, page 42”. I found Book 1215, and page 42, but couldn’t find a mention of Broad Street there. What I did experience though, was coming directly into contact, face to face in fact, with history. Perhaps archaeology is more appropriate. The surveyor must have either dropped his open note book in the street, on a rainy muddy March day, or perhaps in the sewer itself. I am not sure how the surveyors assessed the sewers. I doubt they were able to get down into them at certain points, although they were not big sewers. Perhaps they dropped their head into holes, put their arms down, or, more likely and hygienically, use a plumb-bob. But this page is covered in splashed “mud”. The surveyor didn’t try to clean it and his work is underneath the layer of dry, caked “mud”. I say “mud” because I don’t know what it is. Is it from the road side, which could well be pretty unpleasant?

Perhaps it is the contents of the sewer he was looking at on Broad Street. I wonder whether it is worth analyzing this dirt to assess what it actually is. Would it have a use for the historian and archaeologist? This could be a rare example of sediment from a mid 19th century street, or sewer, preserved in a book. Are there many examples of this sediment? I’m not sure there are. 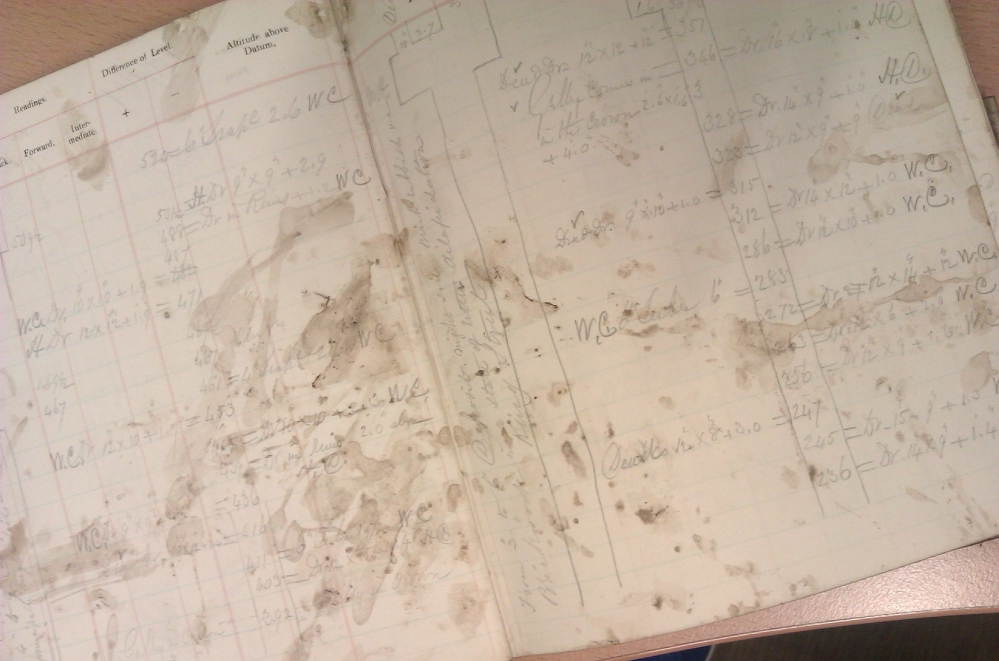 Another question I have is, why did the surveyor not clean it? Perhaps the substance on the page is particularly unpleasant and he did not have the desire to clean it. Instead he just copied the details of the plan from beneath the “brown” layer, closed the book and forgot about it. Maybe the surveyor left it as evidence of the sediment that was building up inside the sewers and clogging the actual conduits and drains. If it was particularly bad, he could use it as evidence; the smell and look of it. At least I can say, although I didn’t find a link to the events on Broad Street of September 1854, I did find a direct link to the very subject I was looking for.

The Metropolitan Commission of Sewers

The Metropolitan Commission of Sewers archive at LMA

Writing odd stuff about history, archaeology and archives. View all posts by The Historier