A few lines and quotes from a blog I wrote a few years ago on Seething Wells.

‘About half a Mile from the Bowling-Green at the West End of he Town [Kingston], is a Spring that is cold in Summer, and warm in Winter; it bubbles up, and is called Seething-Well. The Inhabitants thereabout do use to wash their Eyes with it, and drink of it.’

John Aubrey’s ‘The Natural History and Antiquities of Surrey’, 1718 (but largely written in the 1670s. With thanks to Shaan Butters).

“Nobody is healthy in London, nobody can be.”

A woman dropping her tea-cup in horror upon discovering the monstrous contents of a magnified drop of Thames water. In the nineteenth century, sewage and waste contaminated the River Thames in London, making it a prime source of water-borne diseases such as cholera and typhoid.

Monster Soup was drawn 20 years before the water companies starting pumping clean water from Seething Wells to the Metropolis.

“The water taken from the river Thames at Chelsea for the use of the inhabitants of the western part of the metropolis, being charges with the contents of the great common sewers, the drainings from dunghills, and laystalls, the refuse of hospitals, slaughterhouses, colour, lead and soap works, drug mills and manufactories, and with all sorts of decomposed animal and vegetable substances, rendering the said water offensive and destructive to health, ought not to be taken up by any of the water companies from so foul a source.”

“It is become little short of compulsory upon all classes to provide themselves with abundant supplies of pure wholesome water, as one of the most essential elements, not only of private comfort but of public health.”

James Simpson, engineer, in a report to the Lambeth Board of Directors, 1848

20 years after Monster Soup, not much had changed. Arthur Hassle: 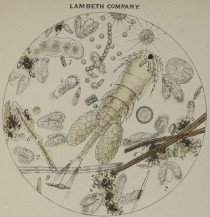 “A portion of the inhabitants of the metropolis are made to consume, in some form or another, a portion of their own excrement, and moreover, to pay for the privilege.”

Arthur Hassle, Microscopic Examination of the Water Supplies to the Inhabitants of London, 1850

“The engineers have always been the real sanitary reformers”

William Cubitt, Presidential address to the Institute of Civil Engineers, 1850 (that’s 8 years before the Great Stink and before Bazalgette even got started).

“In the pleasant towns of Chertsey, Walton, Kingston and Staines… In those pleasant little towns on Thames, you may hear the fall of the water over the weirs, or even, in still weather, the rustle of the rushes; and from the bridge you may see the young river, dimpled like a young child, playfully gliding away among the trees, unpolluted by the defilements that lie in wait for it on its course, and yet out of hearing of the deep summons of the sea.”

View all posts by The Historier